Cleanse on the weekend?? Not so bad after all I haven't written in a few days so I am going to squish the whole weekend into one post. The overall consensus for me was...cleansing on the weekend was not so bad after all. Other than my dream on Friday night of absolutely killing a mounds bar...why a mounds bar? I have no idea, I have never eaten one of these ever, and it would not be my candy bar of choice. I'm thinking more of a Reese's Peanut Butter cup or Snickers! But other than the dream, I have not had any cravings...yay! Friday the meals were good...the best part was rolling my own sushi! Who knew my college past times would come in handy for current cooking! 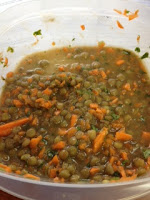 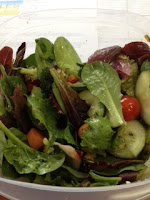 FRIDAY MEALS:
Breakfast was good, it was the same as day 1 so I had 2 scrambled eggs, spinach and 2 pieces of whole grain toast.
Lunch consisted of Lentil Lime Salad which was good, but not something I would eat outside of cleansing because it left a weird taste in my mouth and lentils do nothing for my stomach. We also had a Microgreen Salad which was so very good. We eat the Microgreen Salad a lot in Phase One.
Dinner was awesome because I got to roll my own sushi...I plan on doing this as soon as the cleanse is over and filling it with delicious and random things like fruit and cream cheese. Paired with the sushi we had a Japanese Cucumber Salad which was ok... I am not a fan of slimy seaweed in my food, so I really wouldn't mind if this was not on the menu the rest of the time, and lastly we topped it off with some Miso soup. I could hardly finish the dinner, there was so much food! I am not complaining, it is a good thing that there is so much food! 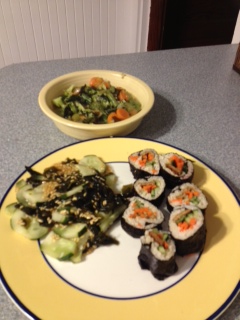 SATURDAY MEALS:
Breakfast was awesome and so filling! It was a fresh fruit plate (2 cups of fruit!), 1/2 cup of plain yogurt with some honey drizzled on top, and a slice of whole grain toast. 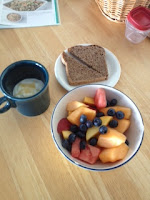 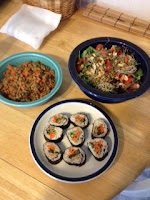 Lunch was the same as Friday nights dinner but a Microgreen salad instead of the Japanese Cucumber Salad, once again very filling and I was extremely happy to replace the seaweed salad with a normal one.
Dinner was also awesome, it was Stir-Fried Veggies with Quinoa, and a Cucumber and Tomato Salad. All these recipes are provided in the book that comes with the cleanse, and are very good, but do take some time to prepare so my advice to anyone doing this cleanse is to read the night before what you need and how long it will take to prep and make. I have been making meals the night before for the next day because it is so time consuming. 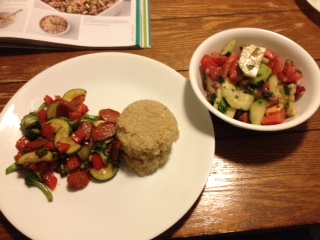 Breakfast was 1 cup of oatmeal, with 3 tablespoons of toasted pumpkin seeds (it was suppose to be walnuts but I didn't have any), 1 tablespoon of maples syrup which I loved and actually licked the bowl it was in after...gross I know, and 1/2 cup of fresh fruit. 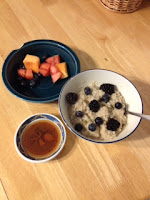 Lunch was alright, but not my favorite. I have been freezing this entire cleanse, but in particular I was especially cold on Sunday. The book said that during the cleanse you tend to be colder than normal and to bundle up and although I have been I still sneak the heat on because I feel like I am in the North Pole...and my roommate wants to kill me now. That being said, I like something warm in my meals but the lunch Sunday consisted of a raw veggie plate....not my fave. We also got to eat Quinoa salad and 1/3 cup of hummus, but it just was NOT hitting the spot for me.
Thankfully, Dinner was much better! For dinner we had Miso Soup, Stir-Fried Veggies and 1/2 cup of cooked brown rice. It was delish :) 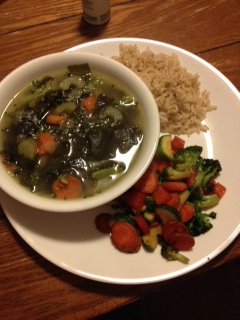 Overall this weekend went well, better than expected. I did go out on Saturday night and managed to pass up all non cleanse food, but did have a drink. I drank watered down vodka...got tipsy off one. At least now I am a cheap date! Also, I am doing this cleanse with someone else which has made it so much easier and better. If you are thinking of doing it, try and find someone to cleanse with you. It decreases your food cost, prep time, cooking time and not to mention its good to have someone to share all your experiences with! Only 2 more days of phase 1 and then it is onto the Release phase...which involves a detox supplement....oh boy am I nervous for that one!